Due to its extreme coldness, humans don't live in the tundra. Humans go here mainly for research or just to broaden their horizons. Venturing into this biome requires multi-layers of clothing to brave the harsh temperatures. Even then, human impacts have reached the tundra. Human activity and pollution has caused global warming, which has a profound affect in the tundra; it's causing all the ice to melt. Other impacts include the oil reserves in the Arctic. Many oil companies are now targeting these huge, untapped reserves for money. These oil and gas industries and, not to mention, garbage have left the tundra polluted.

Humans live in the taiga and they have a huge impact on it. Since there are so many trees, humans cut the trees down to use and build homes. Logging in the forests is causing giant amounts of deforestation. As humans burn fossil fuels, it pollutes the air and causes acid rain. Acid rain then weakens the trees' leaves, limits the nutrients they can take in, and poisons them with toxins released from the soil. The weak trees can be easily attacked by pests and diseases; they can also be injured from cold weather. Protection can include replanting trees where the trees are sparse and requiring factories to use scrubbers so that the pollution being released into the atmosphere can be reduced.

Since the weather in this biome is moderate, humans can live here. They survive by hunting the animals that live here and forage for the native grown plants too. However, sometimes humans go overboard and the excessive hunting and gathering tips the natural balance and breaks the harmony between the plants and animals living in the grasslands.

The characteristic nice weather of this biome has attracted an abundance of humans. Humans fix the environment to suite their needs, such as cutting down trees and constructing houses and roads. This leads to a dramatic decline of the natural foliage and animal species, deforestation, and pollution from factories and cars. It has also led to the introduction of invasive species that humans brought with them as they settled into this biome.

Humans live in this biome. In order to adapt, humans have affected the Chaparral. Chaparral biomes all over the world have been heavily affected by human activities, such as grazing, logging, building of dams, agriculture, and urbanization. This has caused plant and animal species to decline, some even nearly getting wiped out. Since this biome is very dry, humans can also easily cause fires, which then decimate the plants and animals living here too.

The extreme conditions in the desert make it not the best place for humans to live in. Even so, desertification is occurring all around deserts. Desertification is when desert plants are being taken out of their natural habitat by humans to sell and make a profit out of it. Oil and minerals are also being taken out of the desert and they cannot be replaced later on. For these oils and minerals to get taken out, roads must be built and this affects the desert environment. Also, since the world climate is changing due to human activity and pollution, the desert climate will probably change along with tit too.

Humans can live in this biome and affects it in many ways in order to make the biome adapt to human needs. Large areas of savannas have been turned into farmland for grazing cattle and this kills the land and turns the savanna into a desert. Tree clearing also destroys a very big part of this biome. Sometimes, people can start fires in the savanna and this then causes many plants and animals to be destroyed. Humans also earn much money from mining in the savanna. Mining destroys lots of the savannas' vegetation and resources.

Humans live in this biome and affect it immensely. Logging makes the rainforest lose up to 137 plant and animal species every day just from deforestation. 200 million tons of wood is used per year for the paper industry. All that wood comes from chopping down trees. Humans cause oil spills, toxic by-products, and mining accidents and the constant dumping of wastes are threatening the rainforest. People also practise slash and burn agriculture, which then makes the soil infertile and causes vegetation to cease growing. This lack of plants means that there will be less plants to turn carbon dioxide into oxygen, which then means that there will by more carbon dioxide in the atmosphere causing global warming.

Not many people permanently live here due to the winter-like conditions and the mountains; however, there are national parks humans go to. The Trail Ridge in Rocky Mountain National Park results in the rapid destruction of plants in the places most visitors go. Areas where the soil is high in moisture is most susceptible to getting trampled. This is followed by fall herb ecosystems and then, finally, fell fields. The most durable areas to trampling are turf ones. Some other human activities that affect the alpine biome are rock collecting, littering, crushing by car tires and flower picking. 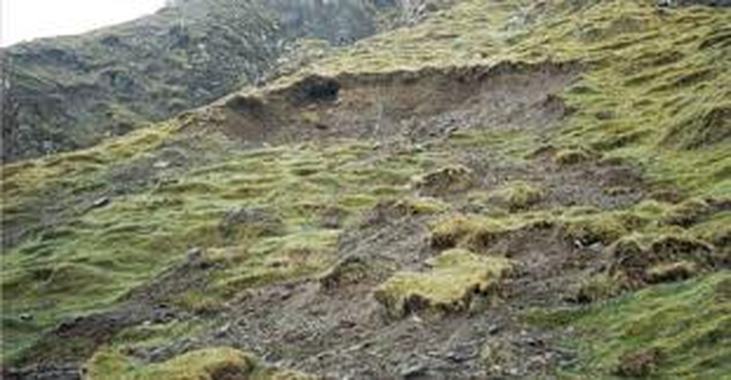 Humans trample the ground and has destroyed many plants where they step.